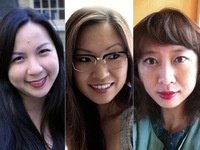 Three Kundiman fellows with award-winning first books read and talk about their work.

Cathy Linh Che is the author of Split (Alice James, 2014), winner of the 2012 Kundiman Poetry Prize.

A Vietnamese American poet from Los Angeles and Long Beach, CA, she received her B.A. from Reed College and her M.F.A. from New York University. She has been awarded fellowships and residencies from Poets & Writers, The Fine Arts Work Center at Provincetown, Kundiman, Hedgebrook, Poets House, The Asian American Literary Review, The Center for Book Arts, and The Lower Manhattan Cultural Council’s Workspace Residency.

A founding editor of the online journal Paperbag, she is Program Associate for Readings & Workshops (East) at Poets & Writers and Manager of Kundiman. She lives in Brooklyn, New York.

Eugenia Leigh is the author of Blood, Sparrows and Sparrows (Four Way Books, Fall 2014), which was a finalist for both the National Poetry Series and the Yale Series of Younger Poets. Her writing has appeared in numerous publications including PANK Magazine, Indiana Review, The Collagist, and the Best New Poets 2010 anthology.

Eugenia earned her M.F.A. in Creative Writing from Sarah Lawrence College, where she was awarded the Thomas Lux Scholarship for her dedication to teaching creative writing, demonstrated through her workshops with incarcerated youths and with Brooklyn high school students. Eugenia has won awards from Poets & Writers Magazine and Rattle, and has received fellowships from Kundiman and The Asian American Literary Review. She serves as the Poetry Editor of Kartika Review.

Born in Chicago and raised in southern California, Eugenia lives and writes in New York City.

Sally Wen Mao is the author of Mad Honey Symposium (Alice James Books, 2014), the winner of the 2012 Kinereth Gensler Award and a Publishers Weekly Top 10 Most Anticipated Poetry Books of Spring. Her work has been anthologized in The Best American Poetry 2013 and is published or forthcoming in Guernica, Gulf Coast, Hayden’s Ferry Review, Indiana Review, Puerto del Sol, Quarterly West, Third Coast, and West Branch, among others. A Kundiman fellow, she holds a B.A. from Carnegie Mellon University and an M.F.A. from Cornell University.

This event is part of the Honey Badgers' Summer Book Tour.