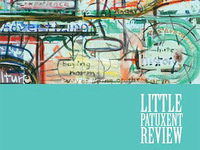 Celebrating the release of Little Patuxent Review's Summer 2014 issue, LPR is excited to host a reading and conversation with four writers. Joseph Ross, Alan King, Michael Brokos, and Tafisha Edwards will read a selection of original work published in LPR and other journals, followed by a panel discussion on the role of small press journals in the career of poets. Copies of the latest issue of Little Patuxent Review and books by the authors will be on sale at the event.

Joseph Ross is the author of two poetry collections: Gospel of Dust (2013) and Meeting Bone Man (2012). His poems appear in many anthologies and literary journals including Poet Lore, Tidal Basin Review and Drumvoices Revue. He has received three Pushcart Prize nominations and is the winner of the 2012 Pratt Library / Little Patuxent Review Poetry Prize. He teaches English at Gonzaga College High School in Washington, D.C., and writes regularly at www.JosephRoss.net.

Alan King is an author, poet and journalist who blogs about art and social issues at alanwking.com. A Cave Canem graduate fellow, he holds a Masters of Fine Arts in Creative Writing from the Stonecoast Program at the University of Southern Maine. He is the recipient of the Best City Poem of 2006 (3rd Muses Prize), and was a 2009 and 2012 Best of the Net nominee and a two-time Pushcart Prize nominee. His work has been published in 11 anthologies and dozens of journals─Tidal Basin Review, MiPOesias, Compass Rose, Black Arts Quarterly, and Indiana Review, to name a few. His debut collection of poems, Drift, was published by Aquarius Press in 2012.

Michael Brokos received an MFA in poetry from Boston University in 2012.  He is the recent recipient of a Bakeless Fellowship from the Bread Loaf Writers’ Conference and the Camargo Foundation, during which he spent the month of May 2014 in southern France.  His work appears in Little Patuxent Review, Hobart, Salamander, Sixfold, and other journals.  He lives in Baltimore, where he works as a writer and editor.

Tafisha Edwards is a Guyanese Canadian poet, Cave Canem fellow, and graduate of the Jiménez-Porter Writers House. She lives and works in the Washington, D.C., metropolitan area after earning her B.A. in Journalism from the University of Maryland, College Park. You can find her most recent works in Little Patuxent Review, Vinyl Poetry, Toe Good Poetry, and Stylus. She is working on her first collection of poems entitled Glamourpuss.