Home /  Books & More / Live From the Pratt / Matthew Thomas, We Are Not Ourselves

Matthew Thomas, We Are Not Ourselves 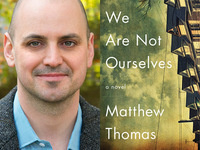 When Eileen Tumulty, raised by her Irish immigrant parents in Queens, meets Ed Leary, a scientist, she thinks she's found the perfect partner to deliver her to the cosmopolitan world she longs to inhabit. After they marry, Eileen quickly discovers that Ed doesn't aspire to the same American Dream. Through the Learys, novelist Matthew Thomas charts the story of the American Century: the promise of domestic bliss and economic prosperity that captured hearts and minds after WWII.