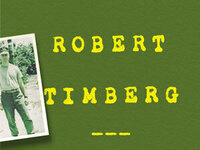 From the injuries he suffered as a Marine lieutenant in Vietnam in 1966 to the Iran-Contra affair that he covered as a journalist and which involved his fellow veterans, Robert Timberg's life has been shaped by the Vietnam War. In Blue-Eyed Boy, the former Baltimore Sun White House correspondent looks back on his own struggle to survive and reflects on what that era has meant to the nation as a whole.

Robert Timberg is the author of The Nightingale's Song, John McCain: An American Odyssey, and State of Grace: A Memoir of Twilight Time. He worked at the Baltimore Sun for more than three decades as a reporter, an editor, and White House correspondent.