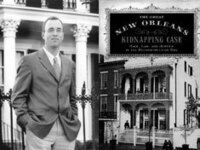 Michael Ross offers the first full account of the June 1870 abduction of seventeen-month-old Mollie Digby, an incident that electrified the South at one of the most critical moments in the history of American race relations.

Mollie was kidnapped from in front of her home in New Orleans. This was at the height of the Reconstruction, and race tensions were high. Nervous white residents fearing impending chaos pointed to the Digby abduction as proof that no white child was safe now that slavery had ended and the South had been "Africanized." The case was sensationalized in papers across the country, and Afro-Creole detective Jean Baptiste Jourdain became the first black detective to make national news.

Michael Ross is associate professor of history at the University of Maryland and the author of the prize-winning Justice of Shattered Dreams: Samuel Freeman Miller and the Supreme Court During the Civil War Era.