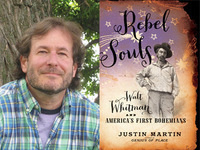 In the shadow of the Civil War, a circle of radicals in a rowdy saloon changed American society and helped set Walt Whitman on the path to poetic immortality.

Justin Martin is the author of three previous books, most recently Genius of Place: The Life of Frederick Law Olmsted.