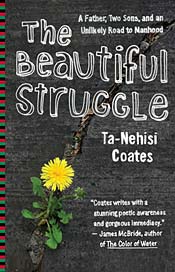 Ta-Nehisi Coates talks about his new book, The Beautiful Struggle: A Father, Two Sons, and an Unlikely Road to Manhood. A coming-of-age story, set in Baltimore in the 1980's.

Ta-Nehisi Coates and his six siblings were raised by an enigmatic and unconventional father, Paul Coates (former Black Panther leader in Baltimore and founder of Black Classic Press), who was intent on pushing his children past the streets and into Howard University. This beautifully written memoir tells the story of the strong ties that bind father and son.

Ta-Nehisi Coates is a former staff writer at the Village Voice and Time; he contributes to the New York Times Magazine, The Atlantic, and other publications.