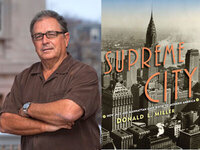 Donald Miller's new book, Supreme City, is the story of Manhattan's growth and transformation in the 1920s and the brilliant people behind it. Chronicling the era immortalized by F. Scott Fitzgerald, Miller shows how Midtown Manhattan was transformed into the entertainment and communications center of New York and a business district that rivaled Wall Street.

Donald Miller is the bestselling author of nine books, the John Henry MacCracken Professor of History at Lafayette College in Pennsylvania, and one of the most respected authorities on World War II and U.S. history. His book on Chicago, City of the Century, was the basis for an award-winning PBS series of the same name, and another PBS documentary, Victory in the Pacfic, was based in part on his book D-Days in the Pacific. HBO is currently making his book Masters of the Air: America's Bomber Boys Who Fought the Air War Against Nazi Germany into a miniseries produced by Steven Spielberg and Tom Hanks.