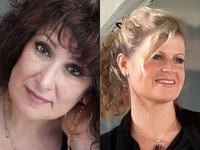 Elmaz Abinader is an award-winning author, poet, and playwright whose works are inspired by the dislocation of her parents from Lebanon to the US, as well as dislocations, occupations, and disenfranchisement of other people in the Arab World and Diaspora. She has been a Fulbright Scholar to Egypt, has conducted writing workshops in Palestine, and has toured several countries with her one-woman plays. She is also a Professor of English at Mills College in Oakland, CA, where she specializes in creative nonfiction/memoir, poets of color, and pedagogy. She co-founded VONA Voices in 1999 with the mission to nurture developing writers of color. This House, My Bones, her new collection of poetry, is the 2014 Editor’s Selection in Poetry at Willow Books/Aquarius Press and has been praised by poet Patricia Smith as "a gorgeously scripted chronicle that probes the collective heart and the countries we inhabit when we dare to speak out loud."

Kim Jensen is a writer, educator, and political activist whose books include The Woman I Left Behind, Bread Alone, and The Only Thing that Matters. Her fiction, poems, and essays have appeared in many journals and anthologies. Her recent doctoral dissertation in creative writing is a post-September-11th novel called Forget Jerusalem. Active in the peace and justice movement for many years, especially the struggle for Palestinian liberation, Kim is associate professor of English at the Community College of Baltimore County where she is the founding director of the Community Book Connection, an interdisciplinary literacy initiative that demonstrates the vital connection between classroom learning and broader social issues. Writes poet Naomi Shihab Nye, "Kim Jensen’s poems are searing and spare. They will haunt you and stretch your vision. You won’t be the same person after reading them that you were before.”