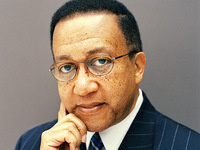 Born and raised in Oxford, North Carolina, Benjamin Chavis, Jr. desegregated his hometown’s whites-only public library, becoming the first African American to be issued a library card in the town’s history.  In 1965, while a college freshman, he became a statewide youth coordinator in North Carolina for Dr. Martin Luther King, Jr. and the Southern Christian Leadership Council.

Dr. Chavis and nine others (the Wilmington Ten), charged with conspiracy and arson in 1972 for their school desegregation protests, were convicted and sentenced. Eight years later the conviction was overturned, and they were released.

In 1993 Dr. Chavis became the youngest executive director of the NAACP. He later served as the national director of the Million Man March and the founder and CEO of the National African American Leadership Summit.  With Russell Simmons, he co-founded the Hip-Hop Summit Action Network in 2001. Dr. Chavis currently serves as President and CEO of the National Newspaper Publishers Association and President of Education Online Services Corporation.