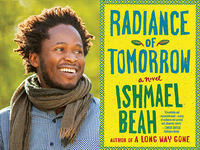 When Ishmael Beah’s A Long Way Gone was published in 2007, it soared to the top of bestseller lists, becoming an instant classic: a harrowing account of Sierra Leone’s civil war and the fate of child soldiers that “everyone in the world should read” (The Washington Post). Beah’s first novel, Radiance of Tomorrow, is a tender parable about postwar life in Sierra Leone. It features Benjamin and Bockarie, two longtime friends who return to their hometown after the civil war. They try to forge a new community by taking up their former posts as teachers, but they’re beset by obstacles. Radiance of Tomorrow is a powerful novel about preserving what means the most to us, even in uncertain times.

Ishmael Beah is a UNICEF Ambassador and advocate for Children Affected by War; a member of the Human Rights Watch Children’s Advisory Committee; visiting senior research fellow at the Center for the Study of Genocide, Conflict Resolution and Human Rights, Rutgers University; and president of The Ishmael Beah Foundation.