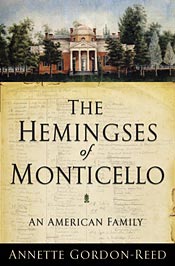 Following her groundbreaking book, Thomas Jefferson and Sally Hemings, historian and legal scholar Annette Gordon-Reed traces the Hemings family from its origins in Virginia in the 1700's to the dispersal after Thomas Jefferson's death in 1826 in her new book, The Hemingses of Monticello (winner of the 2008 National Book Award for Nonfiction). The saga of this American slave family is set against the backdrop of Revolutionary America, Paris on the eve of its own revolution, 1790's Philadelphia, and plantation life at Monticello.