Brown Lecture: April Ryan, The Presidency in Black and White 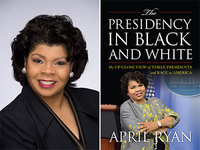 As AURN’s White House correspondent, April Ryan is the only black female reporter covering urban issues from the White House, a position she has held since 1997. She hosts the daily feature, The White House Report, which is broadcast to AURN’s nearly 475 affiliated stations nationwide. Ryan grew up in and still resides in Baltimore.

The Brown Lecture Series is sponsored by a generous gift from the Eddie C. and C. Sylvia Brown Foundation.