Barney Frank, Frank: A Life in Politics from the Great Society to Same Sex Marriage 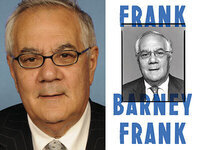 How did a disheveled, intellectually combative gay Jew with a thick accent become one of the most effective politicians of our times? In this feisty and moving memoir, former Congressman Barney Frank recounts the battle over AIDS funding in the 1980s, the debates over "big government" and gays in the military during the Clinton years, and the 2008 financial crisis. In 2010 he coauthored the most far-reaching, and controversial, Wall Street reform since the Great Depression and helped bring about the repeal of Don't Ask Don't Tell.

Barney Frank also discusses the frustrations and fears that come with elected office. He recalls the emotional toll of living in the closet for many years and how he decided to reveal his sexuality when the conflict between his public crusade against homophobia and his private accommodation of it was becoming unbearable. He discusses his quarrels with allies, his friendships with other public figures, and how he found love with his husband, Jim Ready.