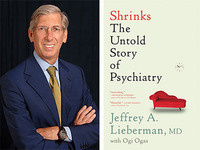 In Shrinks, Jeffrey Lieberman, MD, shares the story of psychiatry's origins and the checkered history of useless or harmful treatments that made psychiatry the black sheep of medicine. Lieberman describes psychiatry's scientific rehabilitation, beginning after WWII, with the discipline's slow embrace of psychopharmacology, genetics, and neuroscience, and how it has been transformed into an evidence-based profession.

Writers LIVE programs are made possible in part by a generous grant from PNC Bank.