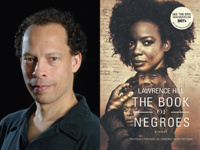 Lawrence Hill talks about his book, The Book of Negroes, which is being reissued in paperback to coincide with the BET miniseries airing in February.

In The Book of Negroes, Hill brings to life the journey of Aminata Diallo, an African, a South Carolinian, a New Yorker, a Nova Scotian, and a Londoner, as she travels from continent to continent and from freedom to enslavement. She becomes the embodiment of the African diaspora.

Lawrence Hill is the author of nine books of fiction and nonfiction. The Book of Negroes (formerly published as Someone Knows My Name) won the Commonwealth Writers' Prize and the Rogers Writers' Trust Fiction Prize. The BET miniseries, directed by Clement Virgo, was filmed in South Africa and Canada and stars Cuba Gooding, Jr., Jane Alexander, Louis Gossett, Jr., and Aunjanue Ellis.

The Brown Lecture Series is supported by a generous grant from the Eddie C. and C. Sylvia Brown Family Foundation.