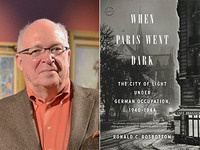 On June 14, 1940, German tanks entered a silent and nearly deserted Paris. Eight days later, France accepted a humiliating defeat and foreign occupation. For the next four years, an eerie sense of normalcy would settle over Paris as the occupiers and the occupied struggled to coexist. Using a vast range of sources, Ronald Rosbottom chronicles the important and minor challenges of day-to-day life under Nazi occupation and the many forms of resistance that took shape during that period.

Ronald C. Rosbottom is the Winifred L. Arms Professor in the Arts and Humanities and Professor of French and European Studies at Amherst College.

Writers LIVE programs are supported in part by a generous gift from PNC Bank.