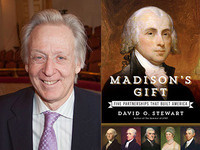 In Madison's Gift, David Stewart restores James Madison, sometimes overshadowed by his fellow Founders, to his proper place as the most significant framer of the new nation.

Short, plain, balding, neither soldier nor orator, low on charisma and high on intelligence, Madison cared more about achieving results than taking the credit. To reach his lifelong goal of a self-governing constitutional republic, he blended his talents with those of key partners -- George Washington, Alexander Hamilton, Thomas Jefferson, and James Monroe. His final partnership with Dolley, whom he married in middle age, sustained him through his political rise, his presidency, and a fruitful retirement.

A former attorney, David O. Stewart is the author of three nonfiction books -- The Summer of 1787, Impeached, and American Emperor -- and the novel, The Lincoln Deception.

Writers LIVE programs are made possible in part by a generous donation from PNC Bank.