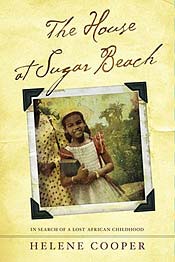 In 1980, 13-year-old Helene Cooper's life in Liberia changed forever when a coup d'etat left the President and his cabinet (including her uncle) dead, her father wounded, her mother raped. Cooper's new memoir, The House at Sugar Beach, recalls her Liberian childhood and her return 20 years after her family's flight to America, to reunite with the foster sister they left behind.

Helene Cooper is a chief diplomatic correspondent for The New York Times. Previously she spent 12 years at The Wall Street Journal.