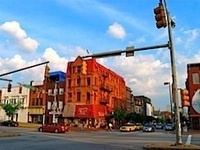 What is gentrification? And how can we prevent it from happening during the revitalization of a neighborhood?

These are the questions social worker/professor-turned-filmmaker Judith Lombardi asks in  her documentary "The Gentrification (k)NOT Movie," which explores the term "gentrification" as an element of a system that displaces people from their communities. Though gentrification is a global issue, this 47-minute documentary focuses on one particular neighborhood, Station North in Baltimore, Maryland.

"One of the most important ways to generate social transformation today is through media and the arts," says Lombardi, whose film presents multiple views about this changing neighborhood from artists, academics, ministers, politicians and everyday people.

Judith Lombardi leads this film discussion about neighborhoods in flux and the possibilities of change.

More about the film:
gentrificationknotproject.net