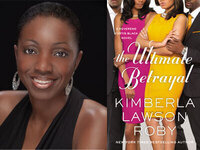 Join us for the Baltimore book launch of Kimberla Lawson Roby’s new Rev. Curtis Black book. It’s been four years since Alicia Black, daughter of Rev. Curtis Black, divorced her second husband. Since then Alicia has been dating her first husband who has asked her to marry him again. But Levi Cunningham, the drug dealer who caused the breakup of marriage number one, has just been released from prison, and Alicia can’t get him out of her mind.

Kimberla Lawson Roby has won numerous awards for her writing, including a 2013 NAACP Image Award for The Reverend’s Wife.