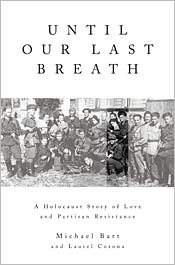 Michael Bart's parents, Leizer and Zenia, were Lithuanian Holocaust survivors. It was not until after their death that their son began to piece together their history of love, struggle, resistance and survival.

Michale Bart spent 10 years researching his parents' past. In Until Our Last Breath: A Holocaust Story of Love and Partisan Resistance, Bart tell the story of their romance in the Vilna ghetto and the heroics of the ghetto resistance and partisan fighters.