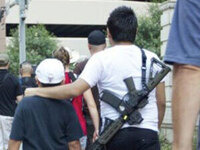 In the wake of the 2012 Sandy Hook school massacre, many expected a broad strengthening of gun control laws and a reconsideration of America's gun culture. Yet the gun rights movement, headed by the National Rifle Association, has gained ground in its fight against gun control laws. Gun rights advocates argue that firearms are essential in maintaining freedom. In Do Guns Make Us Free?, Firmin DeBrabander examines the ways that proliferation of guns impacts freedom and finds that a heavily armed citizenry diminishes core freedoms for all of us.

Firmin De Brabander is an associate professor of philosophy at Maryland Institute College of Art.