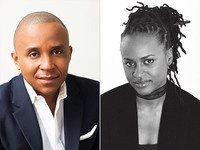 In the wake of the killing of Freddie Gray and the subsequent uprising, many media outlets focused on tired stereotypes about black criminality rather than the years of oppression that sparked the protests. Rashad Robinson, Executive Director of ColorOfChange, and Stacey Patton, reporter for The Chronicle of Higher Education, will talk about how dehumanizing media coverage can reinforce bias and negatively impact black communities.

Since 2005, ColorOfChange, the nation's largest online civil rights organization, has been a leading force in holding government and corporations accountable to black people and advancing visionary solutions for building a just society. From fighting for justice for Michael Brown, Eric Garner, Renisha McBride and Trayvon Martin to battling attempts to suppress the black vote and helping shape the successful strategy in the fight to protect a free and open Internet, ColorOfChange has been at the forefront of the most critical civil rights issues of this century.

Before joining The Chronicle, Stacey Patton was a senior editor and writer for the NAACP Legal Defense and Educational Fund. She has also reported for the Washington Post and the Baltimore Sun.

Talking About Race is presented in partnership with Open Society Institute-Baltimore.