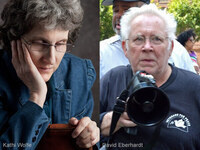 Kathi Wolfe is a poet and writer. Wolfe's most recent collection, The Uppity Blind Girl Poems, winner of the 2014 Stonewall Chapbook Competition, was published by BrickHouse Books in 2015. Her work has appeared or is forthcoming in Wordgathering, Gargoyle, Poetry Magazine, and other publications. In 2013, Finishing Line Press published Wolfe's poetry chapbook The Green Light. Her collection Helen Takes the Stage: The Helen Keller Poems was published by Pudding House in 2008. She was a 2008 Lambda Literary Foundation Emerging Writer Fellow. Wolfe is a contributor to the groundbreaking anthology Beauty Is a Verb: The New Poetry of Disability. She is a contributor to the Washington Blade, the acclaimed LGBT newspaper.

David Eberhardt has published three books of poetry: The Tree Calendar, Blue Running Lights, and Poems from the Website, Poetry in Baltimore.He is at work on amemoir:For All the Saints. As a peace protester, Dave was incarcerated at Lewisburg Federal Prison in 1970 for 21 months for pouring blood on draft files with Father Philip Berrigan and two others to protest the Vietnam War. He is retired after 33 years of work as a Director of Offender Aid and Restoration at the Baltimore City Jail.

Gregg Mosson is the author of two books of poetry, Questions of Fire and Season of Flowers and Dust. From 2003 through 2010, he founded and edited the magazine Poems Against War: a Journal, which published seven issues and remains archived online at www.poemsagainstwar.com. He is a former reporter and commentator whose work has appeared in The Cincinnati Review, The Baltimore Sun, The Oregonian, The Baltimore Review, and The Futurist. His poetry has appeared in many small-press journals. A graduate of the Johns Hopkins Writing Seminars, he has taught both at Johns Hopkins and at the University of Baltimore. He is a former contributing poetry editor at The Baltimore Review.

In Cleveland, full of love
and kumquats, we leave our
favorite Chinese place. "You
should watch her! She might fall!"
a prune-faced woman growls. I do
and I enjoy it, you whisper.

O this world of sad disappearances- another species gone today, I felt it

Slipping- I don't think I can do without the great apes!- militias filtering through

--from "Great Apes" by David Eberhardt

[...H]e speaks his poetry
before sixteen people on a Sunday, and the words quiver
like a finger sliding along a razor, back-and-forth
from rage to care . . . care to rage . . . rage to care.

--from "Unknown Soldier (for David Eberhardt)" by Gregg Mosson