Home /  Books & More / Live From the Pratt / Talking About Race: Rights for… 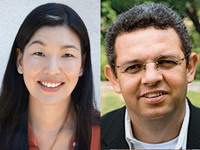 Ai-jen Poo, director of the National Domestic Workers Alliance, and Gustavo Torres, executive director of CASA, will talk about structural changes in the job market that have resulted in many day laborers, especially among immigrants and people of color. They will focus on how we can help build power, respect and fair labor standards for the 2.5 million nannies, housekeepers and elderly caregivers in the U.S.

Ai-Jen Poo is co-director of the Caring Across Generations campaign. She has been organizing immigrant women workers since 1996. In 2000 she co-founded Domestic Workers United, the New York organization that spearheaded the successful passage of the state's historic Domestic Workers Bill of Rights in 2010.

Gustavo Torres is the executive director of CASA, a multi-service Latino advocacy and support agency. He has been recognized nationally and internationally for his leadership and vision in the immigrant rights movement in the United States. He joined CASA's staff as a community organizer and has served as CASA's executive director since 1994.

Talking About Race is presented in partnership with Open Society Institute-Baltimore.