Writers LIVE: D. Watkins, The Beast Side: Living (and Dying) While Black in America 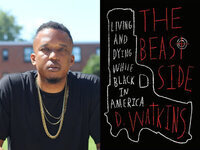 D. Watkins, a native son of the east side (the beast side) of Baltimore, has survived the kind of life in urban America that has claimed the lives of many of his friends and family members. He writes with the compassion and unsentimental clarity of a survivor -- of a man who is passionately determined to stop the cycles of violence and suffering that have long been inflicted on his community. Watkins' debut book, The Beast Side, is a rare, highly personal dispatch from the streets.

When his older brother was shot down by business rivals, Watkins took over his drug racket, earning enough to continue his education. He eventually earned a master's of education from Johns Hopkins University and an MFA in creative writing from the University of Baltimore. He now teaches creative writing at Coppin State University.