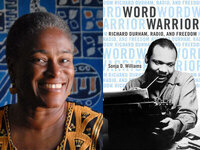 Word Warrior documents the writing, life and times of a pioneering, yet overlooked, African American artist. Throughout Richard Durham's lifetime (1917-1984), this prolific Mississippi-born, Chicago-based writer used his eloquent literary voice and fierce determination to fight for freedom, equality and justice for all.

Durham first authored engaging poetry and radio dramas during the 1930s and '40s. He may be best known for his award-winning "Destination Freedom" series featured on Chicago's NBC affiliate, WMAQ, from 1948-1950. The series took listeners on a weekly, half-hour journey through the lives and accomplishments of African American history makers and heroes -- a truly unique series on a medium that barely recognized and usually negatively stereotyped black citizens in a highly discriminatory America.

Richard Durham also earned honors as an investigative reporter for the black-owned Chicago Defender. During the 1960s, he edited the Nation of Islam's Muhammad Speaks newspaper and served as lead writer for "Bird of the Iron Feather," a pioneering public television series about black life. Durham wrote Muhammad Ali's 1975 autobiography, The Greatest, and later served as a strategist and speechwriter for Chicago's first black mayor, Harold Washington.

Sonja D. Williams is a professor in the Howard University Department of Media, Journalism, and Film. She has worked as a broadcast journalist and media trainer in the Caribbean, Africa and throughout the United States, receiving numerous awards, including three George Foster Peabody Awards for Significant and Meritorious Achievement.