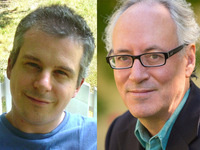 James Arthur and Joseph Harrison read from and talk about their work.

James Arthur’s poems have appeared in The New Yorker, Poetry, The New York Review of Books, The New Republic, and The American Poetry Review. He has received the Amy Lowell Travelling Poetry Scholarship, a Wallace Stegner Fellowship, a Hodder Fellowship, and a Discovery/The Nation Prize. His first book, Charms Against Lightning, was published by Copper Canyon Press. Arthur lives in Baltimore and teaches in the Writing Seminars at Johns Hopkins University. During 2016 he will be the Fulbright Distinguished Scholar in Creative Writing at Queen’s University Belfast.

Joseph Harrison is the author of Someone Else’s Name (2003), Identity Theft (2008), and Shakespeare’s Horse (2015), all published by Waywiser Press. Some of his early poems are anthologized in The Fly in the Ointment (20th anniversary edition, Syllabic Press, 2014). His honors include an Academy Award in Literature from the American Academy of Arts and Letters and a fellowship in poetry from the Guggenheim Foundation. He is the Senior American Editor for Waywiser Press, and the editor of The Hecht Prize Anthology (Waywiser, 2011). He lives in Baltimore.

Read "The Land of Nod" and "A Local History" by James Arthur.

Read "Shakespeare's Horse" and "Dr. Johnson Rolls Down a Hill" by Joseph Harrison.