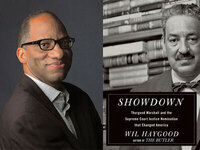 Thurgood Marshall brought down the separate-but-equal doctrine, integrated schools, and not only fought for human rights and human dignity but also made them impossible to deny in the courts and in the streets. In this new biography, award-winning author Wil Haygood details the life and career of one of the most transformative legal minds of the past 100 years.

Using the framework of the dramatic, contentious five-day Senate hearing to confirm Marshall as the first African-American Supreme Court justice, Haygood creates a provocative and moving look at Marshall's life as well as the politicians, lawyers, activists and others who shaped -- or tried to stop -- the civil rights movment of the 20th century.

Wil Haygood is currently the Wiepking Visiting Distinguished Professor in the department of media, journalism and film at Miami University (Ohio). For nearly three decades he was a journalist, serving as a national and foreign correspondent at the Boston Globe, where he was a Pulitzer Prize finalist, and then at the Washington Post, where he wrote the story "A Butler Well Served by this Election," which became the basis for the award-winning motion picture The Butler, directed by Lee Daniels. He is also the author of biographies of Adam Clayton Powell Jr., Sammy Davis Jr., and Sugar Ray Robinson.