Writers LIVE: Daniel de Vise, Andy and Don; the Making of a Friendship and a Classic American TV Show 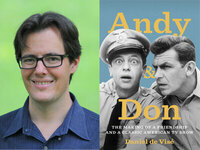 Andy and Don is a lively and revealing biography of Andy Griffith and Don Knotts, celebrating the powerful real-life friendship behind one of America's most-iconic television programs.

Andy and Don -- fellow Southerners born into poverty and raised among scofflaws, bullies, and drunks -- captured the hearts of Americans across the country as they rocked lazily on the front porch. But behind this sleepy, small-town charm, deVise reports explosions of violent temper, bouts of crippling neurosis, and all-too-human struggles with the temptations of fame. Although Andy and Don ended their Mayberry partnership in 1965, they remained best friends for the next half-century, with Andy visiting Don at his death bed.

Daniel deVise, Don Knotts' brother-in-law, is an author and journalist who has worked at the Washington Post, the Miami Herald, and other newspapers in a 25-year career. He shared a 2001 Pulitzer Prize.