Writers LIVE: Naomi Jackson, The Star Side of Bird Hill 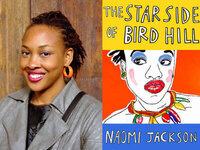 In Naomi Jackson's debut novel, two sisters, ages 10 and 16, are exiled from Brooklyn to Bird Hill in Barbados after their mother can no longer care for them. The young Phaedra and her older sister Dionne live for the summer of 1989 with their grandmother, Hyacinth.

Dionne spends the summer in search of love, testing her grandmother's limits, and wanting to go home. Phaedra explores Bird Hill, where her family has lived for generations, accompanies her grandmother in her role as a midwife, and investigates their mother's mysterious life.

This coming-of-age story builds to a crisis when the father they barely know comes to Bird Hill to reclaim his daughters, and both Phaedra and Dionne must choose between the Brooklyn they once knew and loved or the Barbados of their family.

Naomi Jackson was born and raised in Brooklyn by West Indian parents. She studied fiction at the Iowa Writers' Workshop, where she was awarded the Maytag Fellowship for Excellence in Fiction. Jackson travels to South African on a Fulbright scholarship, where she received an M.A. in Creative Writing from the University of Cape Town.