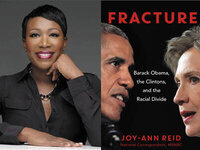 In her new book, Fracture: Barack Obama, the Clintons, and the Racial Divide, MSNBC national correspondent, Joy-Ann Reid looks at the history of race relations in the U.S. while tracing the political shifts in the Democratic party. She examines the complicated relationship between Barack Obama and Bill and Hillary Clinton and how their varied approaches to the race issue parallel the challenges facing the Democratic party itself.

Joy-Ann Reid was the host of MSNBC's "The Reid Report" and managing editor of theGrio.com. She served as a press aide in the final stretch of Barack Obama's Florida campaign in 2008. Reid graduated from Harvard University and was a 2003 Knight Center for Specialized Journalism fellow.