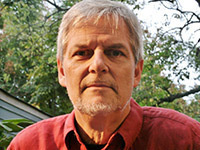 John Gery has published seven books of poetry, most recently, Have at You Now! (2014). His work has appeared throughout the U.S., Europe, and Canada and has been translated into seven languages. Gery has also published criticism on poets ranging from John Ashbery to Marilyn Chin, as well as a critical book on the nuclear threat and American poetry. He has co-authored a guidebook to Ezra Pound’s Venice and a biography of Armenian poet Hmayeak Shems, has co-edited four books of poetry and criticism, and has worked as a collaborative translator from Serbian, Italian, Chinese, Armenian and French. His awards include fellowships from the NEA, the Fulbright Foundation, the Louisiana Division of the Arts, and the University of Minnesota. A Research Professor of English at University of New Orleans and Director of the Ezra Pound Center for Literature, Brunnenburg, Italy, he lives in New Orleans with his wife, poet Biljana Obradovic, and their son Petar.