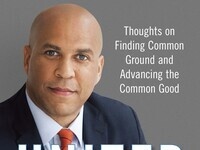 Raised in northern New Jersey, Cory Booker went to Stanford University on a football scholarship, accepted a Rhodes Scholarship to Oxford University, then studied at Yale Law School. Graduating from Yale, his options were limitless. He chose public service.

Booker moved to a rough neighborhood in Newark where he worked as a tenants' rights lawyer before winning a seat on the City Council. In 2006, he was elected mayor, and for more than seven years he was the public face of an American city that had gone decades with too little positive national attention and investment. In 2013, Booker became the first African American elected to represent New Jersey in the U.S. Senate.

In United, Cory Booker draws on personal experience to issue a stirring call to reorient our nation and our politics around the principles of compassion and solidarity. He speaks of rising above despair to engage with hope, pursuing our shared mission, and embracing our common destiny.