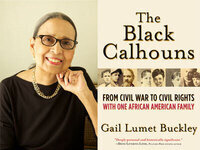 In The Black Calhouns, Gail Lumet Buckley -- daughter of Lena Horne -- delves deep into her family history, detailing the experiences of an extraordinary African American family from Civil War to Civil Rights. Beginning with her great-great grandfather Moses Calhoun, a house slave who used the rare advantage of his education to become a successful businessman in postwar Atlanta, Buckley follows her family's two branches: one that stayed in the South, and the other that settled in Brooklyn.

Through the lens of her relatives' momentous lives, Buckley examines major events throughout American history. From Atlanta during Reconstruction and the rise of Jim Crow, from the two World Wars to New York City during the Harlem Renaissance and then the Civil Rights Movement, this ambitious, brilliant family witnessed and participated in the most crucial events of the 19th and 20th centuries. Combining personal and national history, The Black Calhouns is a vibrant portrait of six generations during dynamic times of struggle and triumph.

Gail Lumet Buckley is the author of American Patriots: The Story of Blacks in the Military from the Revolution to Desert Storm and The Hornes: An American Family, which became a PBS "American Masters" documentary.