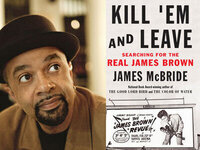 National Book Award winner James McBride goes in search of the "real" James Brown -- and his surprising journey illuminates the ways in which our cultural heritage has been shaped by Brown's legacy.

Kill 'Em and Leave is more than a book about James Brown. Brown's rough-and-tumble life, through McBride's lens, is an unsettling metaphor for American life: the tension between North and South, black and white, rich and poor.

McBride's travels take him to forgotten corners of Brown's never-before-revealed history. He seeks out the American expatriate in England who co-created the James Brown sound, visits the trusted right-hand manager who worked with Brown for 41  years, and sits at the feet of Brown's most influential nonmusical creation, his "adopted son," the Rev. Al Sharpton. He spent hours talking with Brown's first wife and recounts the Dickensian legal contest over James Brown's valuable estate, a fight that has destroyed careers, cheated children out of their educations, cost Brown's estate millions in legal fees, and left James Brown's body to lie for more than eight years in a gilded coffin on his daughter's front lawn in South Carolina.

James McBride is the author of the National Book Award winner, The Good Lord Bird, as well as the bestselling memoir, The Color of Water, and the novels Song Yet Sung and Miracle of St. Anna. He is also a saxophonist and composer who teaches music to children in the Red Hook, Brooklyn, housing projects where he was born. He is a Distinguished Writer in Residence at the Arthur L. Carter Journalism Institute at New York University.