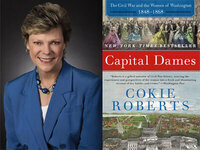 With the outbreak of the Civil War, the small social Southern town of Washington, DC found itself caught between warring sides in a four-year battle that would determine the future of the United States.

After the declaration of secession, many Southern women left Washington, leaving their friends -- such as Adele Cutts Douglas and Elizabeth Blair Lee -- to grapple with questions of safety and sanitation as the capital was transformed into an immense Union army camp and later a hospital.

With their husbands, brothers, fathers marching off to war, whether on the battlefield or in the halls of Congress, the women of Washington joined the cause as well. And more women went to the capital city to enlist as nurses, supply organizers, relief workers, and journalists.

Cokie Roberts chronicles these women's increasing independence, their political empowerment, their indispensable role in keeping the Union unified through the war, and in helping heal it once the fighting was done.

Cokie Roberts is a political commentator for ABC News and NPR. She has won countless awards and in 2008 was named a "Living Legend" by the Library of Congress. She is the author of the bestsellers We Are Our Mothers' Daughters, Founding Mothers, and Ladies of Liberty.