Writers LIVE: Annette Gordon-Reed and Peter S. Onuf, Most Blessed of the Patriarchs: Thomas Jefferson and the Empire of the Imagination 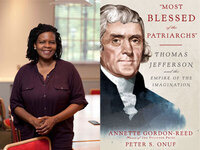 In this groundbreaking work of history, Pulitzer Prize-winning historian Annette Gordon-Reed and the country's leading Jefferson scholar Peter S. Onuf present an absorbing and revealing character study that finally clarifies the philosophy of Thomas Jefferson. Tracing Jefferson's development and maturation from his youth to his old age, the authors explore what they call the "empire" of Jefferson's imagination -- his expansive state of mind born of the intellectual influences and life experiences that led him into public life as a modern avatar of the enlightenment. Jefferson often likened himself to an ancient figure -- "the most blessed of the patriarchs."

Annette Gordon-Reed is the author of The Hemingses of Monticello, which won the National Book Award and the Pulitzer Prize. She is the Charles Warren Professor of American Legal History at Harvard Law School.

Peter S. Onuf is the Thomas Jefferson Memorial Foundation Professor Emeritus at the University of Virginia.