Writers LIVE: Diane Guerrero, In the Country We Love: My Family Divided 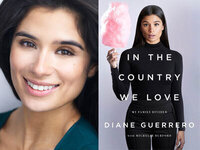 Diane Guerrero, star of "Orange is the New Black" and "Jane the Virgin," shares her personal story of the plight of undocumented immigrants in this country. Guerrero was just 14 years old the day her parents and brother were arrested and deported while she was at school. Born in the U.S., she was able to remain in this country and continue her education, depending on the kindness of family friends who took her in and helped her build a life and a successful acting career.

In the Country We Love is a moving, heartbreaking story of one woman's extraordinary resilience. Written with Michelle Burford, this memoir casts a much-needed light on the fears that haunt the daily existence of families like Guerrero's and on a system that fails them.

Diane Guerrero volunteers with the nonprofit Immigrant Legal Resource Center. She was named an Ambassador for Citizenship and Naturalization by the White House.

Diane Guerrero will be in conversation with Liz Bowie, award-winning education reporter at the Baltimore Sun.