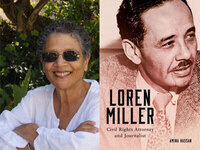 Loren Miller, one of the nation's most prominent civil rights attorneys from the 1940s through the early 1960s, successfully fought discrimination in housing and education. Alongside Thurgood Marshall, Miller argued two landmark civil rights cases before the U.S. Supreme Court, whose decisions effectively abolished racially restrictive housing covenants. One of these cases, Shelley v. Kraemer (1948), is taught in nearly every American law school today. Later, Marshall and Miller played key roles in Brown v. Board of Education, which ended legal segregation in public schools.

Amina Hassan's book, Loren Miller: Civil Rights Attorney and Journalist, recovers this remarkable figure from the margins of history and for the first time fully reveals his life for what it was: an extraordinary American story and a critical chapter in the annals of racial justice.

Born to a former slave and a white midwesterner in 1903, Loren Miller lived the quintessential American success story, blazing his own path to rise from rural poverty to a position of power and influence. Author Amina Hassan reveals Miller as a fearless critic of those in power and an ardent debater whose acid wit was known to burn "holes in the toughest skin and eat right through double-talk, hypocrisy, and posturing."

Amina Hassan is an independent historian and an award-winning public radio documentarian. Her diverse background in public radio and media activism has allowed her to live and travel extensively in the Caribbean, the Near and Middle East, North Africa, Central America and Europe. She has been a Corporation for Public Broadcasting consultant and has administered radio projects for the Smithsonian's National Museum of American History and the Institute for Policy Studies. Hassan has a master's in telecommunications and a Ph.D. in rhetorical criticism from Ohio University.