Writers LIVE: Wenonah Hauter, Frackopoly: The Battle for the Future of Energy and the Environment 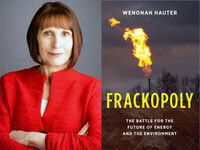 Over the past decade a new and controversial energy extraction method known as hydraulic fracturing, or fracking, has rocketed to the forefront of U.S. energy production. With fracking, millions of gallons of water, dangerous chemicals, and sand are injected under high pressure deep into the earth, fracturing hard rock to release oil and gas.

In her new book, Wenonah Hauter argues that the rush to fracking is dangerous to the environment and treacherous to human health. Frackopoly describes how the fracking industry began; the technologies that make it possible; and the destruction and poisoning of clean water sources and the release of harmful radiation from deep inside shale deposits, creating what the author calls "sacrifice zones" across the American landscape. The book also examines the powerful interests that have supported fracking, including leading environmental groups, and offers a thorough debunking of its supposed economic benefits.

Wenonah Hauter is a longtime public interest advocate working on energy, environmental and agricultural issues. She is the founder and executive director of Food & Water Watch, a watchdog group with offices around the United States. She is the author of Foodopoly: The Battle Over the Future of Food and Farming in America.