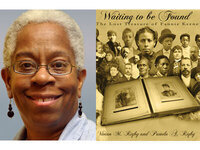 At an auction in Baltimore Pamela Rigby and her mother Vivian Rigby purchased a 19th century photograph album owned by a former slave. The mother-daughter team began the task of researching and writing about Fannie Keene and her lost family treasure.

Over a period of almost 60 years, Fannie Keene amassed an incredible collection of almost 80 photographs of nearly 100 individuals including family members, friends, and two well-known people. Each page of Waiting to Be Found is filled with fascinating information about this extremely rare album and the people pictured.

Vivian Rigby, a teacher, and Pamela Rigby, a programmer and web developer, began their research for Waiting to Be Found in 2003. Early on in research phase, Vivian passed away leaving Pamela to complete  the journey they started together.