Writers LIVE: Regina Calcaterra and Rosie Maloney, Girl Unbroken: A Sister's Harrowing Story of Survival from the Streets of Long Island to the Farms of Idaho 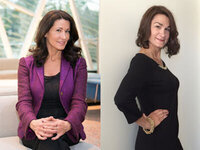 In the sequel to her New York Times bestseller Etched in Sand, Regina Calcaterra pairs with her youngest sister Rosie to tell Rosie’s harrowing, yet ultimately triumphant, story of childhood abuse and survival.

They were five kids with five different fathers and an alcoholic mother (Cookie) who left them to fend for themselves for weeks at a time.  When Regina discloses the truth about her abusive mother to her social worker, she is separated from her younger siblings Norman and Rosie. And as Rosie discovers after Cookie kidnaps her from foster care, the one thing worse than being abandoned by her mother is living in Cookie’s presence. Beaten physically, abused emotionally, and forced to labor at the farm where Cookie settles in Idaho, Rosie refuses to give in. Like her sister Regina, Rosie has an unfathomable strength in the face of hardship — enough to propel her out of Idaho and out of a nightmare.

Filled with maturity and grace, Rosie’s memoir continues the compelling story begun in Etched in Sand — a shocking yet profoundly moving testament to sisterhood and indomitable courage.

Regina Calcaterra is the bestselling author of Etched in Sand, the memoir of her childhood growing up in numerous foster homes, homeless shelters, and on the streets, all the while trying to protect and keep her siblings together. Beating the odds, Regina graduated from the State University of New York at New Paltz in 1988 and Seton Hall University School of Law in 1996. Regina became the founding partner of the New York office of Barrack, Rodos & Bacine (BR&B), an internationally recognized and highly ranked securities litigation firm. From 2006 to 2011 she was a board member of You Gotta Believe, an adoption agency for older foster children. She has worked tirelessly to raise awareness of the perils that foster children face if they age out of the system parentless. Today, she serves as Chief Deputy County Executive to Suffolk County Executive Steven Bellone. Visit her on the web at www.reginacalcaterra.com

Rosie Maloney is a graduate of Idaho State University at Pocatello and presently serves as an account executive at First Digital Telecom.