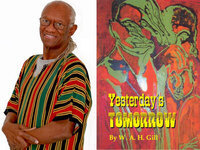 Walter Arthur Harris Gill, Ph.D., the first African American to graduate from the then all-male Baltimore City College High School, writes about his boyhood and youth experiences while growing up in Greenville, Mississippi; Jefferson City, Missouri; Baltimore, Maryland; and on the campus of Morgan State College. He graduated from Morgan State College (University) and later received a masters and doctorate from Syracuse University. Gill has worked as a teacher, professor, artist, actor and author.

W. A. H. Gill is sometimes known as The Urban Professor. Gill has touched over 17,000 students in public, detention and residential center schools and undergraduate and graduates in higher education. He has produced a variety of art works; performed in community theatre, written three books on urban education and designed, copyrighted and promoted the "I Love Balitmore - The Harbor City" tee shirts. His philosophy is "he who teaches, learns."