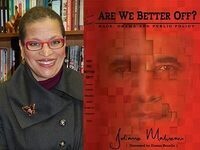 Dr. Malveaux is a labor economist, author and commentator on issues such as race, culture, gender and their economic impacts. Her writing has appeared in USA Today, Black Issues in Higher Education, Ms. Magazine, Essence and many other publications. Her weekly columns, syndicated through King Features, appeared in newspapers across the country from 1990 to 2003. She has hosted television and radio programs and appeared as a commentator on all the major networks.