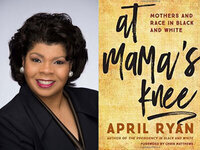 In At Mama's Knee, April Ryan looks at race and race relations through the lessons that mothers transmit to their children. As a single African American mother in Baltimore, Ryan has struggled with each gut-wrenching, race-related news story to find the words to convey the right lessons to her daughters.

To better understand how mothers transfer to their children wisdom on race and race relations, April Ryan reached out to prominent political leaders, celebrities, and others, like Sybrina Fulton, Trayvon Martin's mother. At a time when Americans still struggle to address racial division and prejudice, their stories remind us that attitudes change from one generation to the next and one child at a time.

April Ryan has been the White House correspondent for 20 years for American Urban Radio Networks (AURN), covering three U.S. presidents who have called on her by name. As the Washington Bureau Chief for AURN, she hosts the daily feature "The White House Report," which is broadcast to AURN's nearly 300 affiliated stations nationwide. She is the author of The Presidency in Black and White.