An Evening with D Watkins and Liza Jessie Peterson 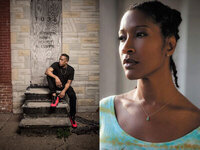 D Watkins (The Cook Up: A Crack Rock Memoir) and Liza Jessie Peterson (All Day: A Year of Love and Survival Teaching Incarcerated Kids at Rikers Island) talk about their new books and the writing life.

Liza Jessie Peterson is an actress, poet, playwright, educator and activist. She has performed her play, The Peculiar Patriot, in more than 35 jails and penitentiaries across the country and has opened for keynote speakers at conferences on mass incarceration. She has appeared in the films Love the Hard Way, Bamboozled, A Drop of Life, and What About Me. She is featured in Ava Duvernay's upcoming Netflix documentary about mass incarceration, 13th.