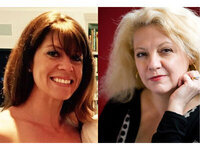 Elizabeth Hazen is a poet and essayist whose work has appeared in Best American Poetry 2013, Southwest Review, The Threepenny Review, The Normal School, and other journals. She earned her BA at Yale and her MA at Johns Hopkins where she was a student in The Writing Seminars. She teaches English at Calvert School in Baltimore, Maryland, where she lives with her son, Gregory, and their cat Ferdinand. Chaos Theories is her first book.

Rose Solari is the author of three full-length collections of poetry, The Last Girl, Orpheus in the Park, and Difficult Weather, the one-act play, Looking for Guenevere, and the novel, A Secret Woman. She has lectured and taught writing workshops at many institutions, including the University of Maryland, College Park; St. John’s College, Annapolis, Maryland; the Virginia G. Piper Center for Creative Writing at Arizona State University; and the Centre for Creative Writing at the University of Oxford’s Kellogg College in Oxford, England. In 2010, she co-founded Alan Squire Publishing (ASP), a collaborative indie publishing initiative, with James J. Patterson; in 2012, ASP became an imprint of the Santa Fe Writers Project (SFWP). Rose’s awards include the Randall Jarrell Poetry Prize, an EMMA award for excellence in journalism, and multiple grants.