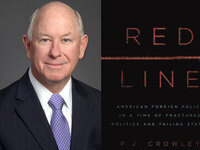 In Red Line: American Foreign Policy in a Time of Fractured Politics and Failing States, former Deputy Secretary of State P. J. Crowley, one of America’s most insightful national security commentators, unpacks the legacy of American triumphs and failures in Iraq.

Over the past quarter century, four consecutive American presidents—two Democrat, two Republican—have spent more time, diplomatic capital, and military resources on Iraq than any other country in the world. Much as the Vietnam syndrome cast a long shadow over American security policy in the decades after the end of the Vietnam War, Iraq provides the commanding narrative for this generation of American leaders. Crowley argues that presidents have fallen victim to the Iraq Syndrome—the disconnect between politics, policy, strategy, and narrative—that has hampered America’s foreign policy in the Middle East and hotspots throughout the world.

P. J. Crowley, Assistant Secretary of State and Spokesman for the U.S. Department of State under Secretary of State Hillary Clinton, appears frequently on national and global television networks. He served as a spokesperson for the U.S. government for 30 years. Crowley was the Assistant Secretary for Public Affairs and Spokesman for the U.S. Department of State between 2009 and 2011 and was the primary U.S. government interlocutor with major media regarding the impact of the release of classified diplomatic cables by WikiLeaks. His opinion pieces have been published in a wide range of print and on-line outlets, including The Washington Post, the Guardian, and the BBC. Atlantic Magazine named him as one of 21 Brave Thinkers in 2011. A Professor of Practice at The George Washington University, Crowley is also a member of the Board of Directors of Al Jazeera America. He resides in Washington, DC.

The program is introduced by April Ryan, veteran White House reporter and National Association of Black Journalists’ Journalist of the Year for 2017.